The US sprayed 80 million litres of poisonous chemicals during Operation Ranch-hand. There were many Agents used, including Pink, Green and White, but Agent Orange was used the most – 45 million litres sprayed over a 10th of Vietnam.

This is the results of Dioxin

He can not walk, He can not Stand-up without help image provided by Hajime Kitamura, Binh Duong Province A girl born without eyes sits in a cot at the Peace Village at Tu Du hospital in Ho Chi Minh City February 3, 2004. Original Source [Reuters] A Vietnamese girl with no arms reads using her feet to hold a book at the Peace Village in Tu Du hospital February 3, 2004. The hospital’s chef de service Doctor Ng Thi Phuong Tan suspects many of the children are deformed in the womb due to exposure to Agent Orange. Two-thirds of the children at the Peace Village are from areas that were heavily sprayed by the highly toxic defoliant during the Viet Nam War. Original Source [Reuters] 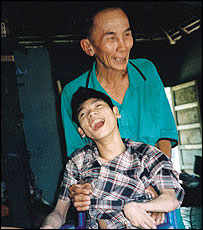 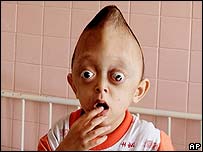 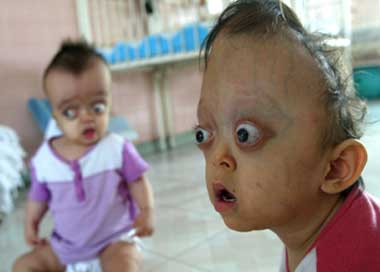 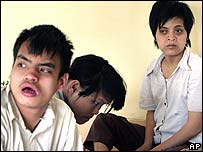 Hoa (R) and Nhon, both born with stunted limbs and 12 fingers, stand at their front door at their home in Dong Ha, north of Hue in central Viet Nam, February 4, 2004. Three Vietnamese who say they or their families became ill from Agent Orange defoliant used by the United States in the war nearly 30 years ago have filed the first lawsuit against makers of the product, a victims group said. [Reuters] Article: Agent Orange, children and the Viet Nam War ( 2004-02-05 09:55) (Reuters)